With the recent adoption of IAPro and BlueTeam, at Lawrence Police Department in Kansas, an article in the Lawrence Journal-World details the wide-ranging changes that are going to benefit both the Department and the public at large. Article can be found at the following link:

In the near future, if a Lawrence police officer uses a taser, firearm or other form of force a during a certain period of time — such as three times in six months — the Lawrence Police Department will be able to automatically flag those incidents to be further reviewed.

That would be an increase in oversight over such instances for the department and is how LPD plans to use a new software program installed earlier this month.

The early-warning flagging will be possible through a tracking system provided through Blue Team/IA Pro, which compiles internal information for the department, specifically public complaints against officers as well as all reports for use of force. Interim Chief Anthony Brixius recently unveiled this new system — a two-sided software providing a reporting tool and data review system — at a city Community Police Review Board meeting. He said the system adds another layer of accountability to the department’s internal oversight.

Even if all of the use of force instances are completely justified, LPD wants to be able to review those incidents in a broader picture and better understand if there are underlying issues that have gone unseen in the past, Brixius told the Journal-World.

“It provides us with a deeper look of what is going on,” Brixius said. “It may be nothing and it may just be the situation they are in, but the review is like a third and fourth tier of review.”

Accountability in policing, especially for use of force, has been a major topic of conversation for years, but had reached another boiling point after the death of Black man George Floyd at the hands of Minneapolis police in May 2020. The event led to civil unrest across the country and increased scrutiny on law enforcement. Lawrence was no different, as protests routinely occurred throughout the summer.

Brixius said LPD came across the Blue Team/IA Pro software last year while meeting with a neighboring police agency for a different topic and was intrigued by the software’s capabilities. According to the software’s website, more than 700 law enforcement agencies in the U.S. have begun using the program.

While complaints against officers were already tracked by LPD, Brixius said the software will be a much more helpful resource by making the information easier to find and review. Previously, the information was kept in each employee’s file, while the new system creates a comprehensive and searchable database of the entire department.

Additionally, use of force was already required to be reported and reviewed by a use of force review board and officers’ supervisors, Brixius said. But the early warning system helps identify issues that may have otherwise gone unnoticed, such as an officer repeatedly being involved in use of force situations, vehicle pursuits or the presence of several civilian complaints.

“That’s what our governing body and our citizens want us to be doing — make sure we are checking, double checking and triple checking that we are doing the right things,” Brixius said.

But Brixius said he’s confident that the new system will not only provide the department with better information on use of force and officer conduct issues, but also will improve information flow to the public.

“I don’t know if we have always met the desire or expectations of what we can report out of because our tracking systems were so manual,” Brixius said. “This is going to give us a much deeper ability to report out on things.” 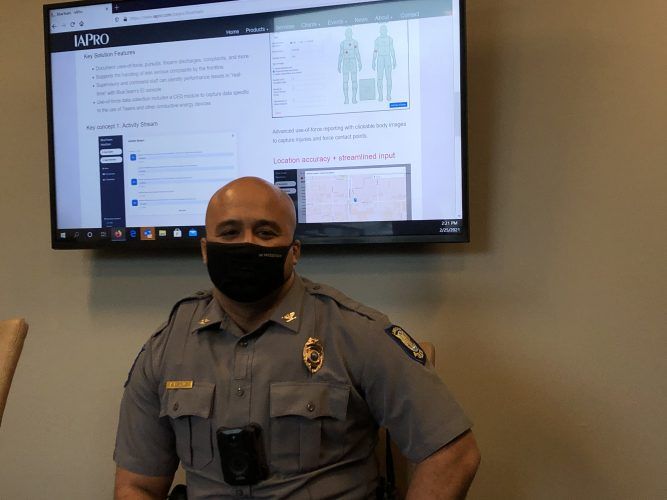 "Lawrence Police Department's Interim Chief Anthony Brixius is pictured in his office on Thursday, Feb. 25, 2021, in front of a screen showing a new software system, Blue Team and IA Pro, the police department is using to track complaints against officers and their use of force." - Lawrence Journal-World


“That’s what our governing body and our citizens want us to be doing — make sure we are checking, double checking and triple checking that we are doing the right things,”